“Mathematics is the music of reason.”  James Joseph Sylvester

Ask a random sample of say 10 people to work out the value of one quarter added to one third and I wager that you will find at least one who will give you the answer two sevenths. I know this to be true, because, throughout my almost 20 years as a maths teacher, I have been given this answer more times than I can remember. We can all see how the answer is achieved:

A question is how to correct it for those who have developed this misconception but a yet more important question is how to avoid this misconception altogether. Correcting this problem is, in my experience, more difficult than one might think. Perhaps because once an idea has entered your head, it is hard to erase – the phrase “practice makes permanent” springs to mind as does the 10% myth – you know the one that says “to find 10%, you just divide by 10”. I can hear maths teachers across the country, if not the whole world, groaning. If we could prevent the fraction misconception from developing in the first place, we would make a significant step forward in terms of mathematics teaching.

I believe fractions need to be introduced early. I know that many adults find fractions daunting but that doesn’t mean we shouldn’t introduce them to very small children. I often say “let’s cross to halfway” and then ok “now we can go the whole way”. Or when sharing a pizza at supper time, “the three of us are sharing this pizza, so we each get a third” – mealtimes and food provide a perfect way in to fractions. This brings me to what I think is the perfect way to introduce fractions. The next step is to work towards equivalency which is the first step to get the sum above right.

I began using breakfast to introduce fractions this when my son was about 2 years old. I would take his toast to the table and say “shall I cut it in half?” fortunately the answer “yes” came back and this was my way in. From there we could talk about what a half meant. We would both have a piece of toast; I would cut them as shown below: 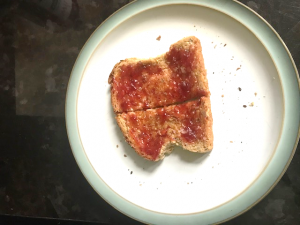 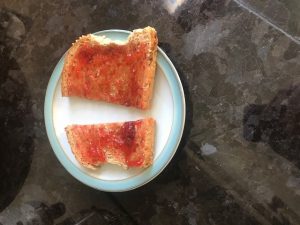 This allowed us to, firstly, have the discussion about two halves needing to be the same size. The ones on the right aren’t halves because one bit is bigger than the other! Then secondly to recognise that two halves make a whole.

Soon enough one piece of toast was being cut into quarters and the other piece of toast still into halves. We were able to see that there are four quarters in a whole and then we began to make the connection between wholes and any fraction, i.e. there are

Next came the question how much have you eaten now? And the answers one quarter, two quarters, three quarters and four quarters came back – albeit a bit slowly! As soon as you start talking about how many quarters you have eaten, you are into equivalent fraction territory. Take the opportunity to pounce. When your child replies with two quarters ask if they can say it differently. Don’t worry if they can’t just gentle guide them to see that two quarters is the same as a half. 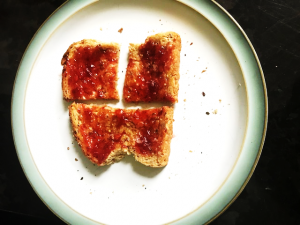 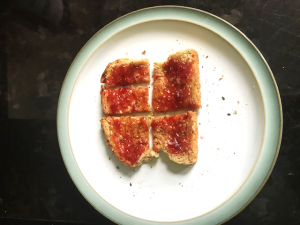 Equivalent fractions and toast can run and run, try eighths compared to halves and quarters next, then thirds and sixths and then fifths and tenths. Getting fluency here is so very important because this is what is going to really help your child when they come on to adding and subtracting fractions. For example, as soon as we understand that a half is the same as two quarters the sum of  is trivial.

One half or one quarter?

dfsjkhlkdflksfghlkfghlskfghklghlkfghkfshgskfhgkshhhgOne third or one quarter?

It wasn’t long before my son realised he could have a bit of fun and I still remember the morning that he trotted into the kitchen and said “Mummy, I want it in sevenths today!” He then watched with a wry smile as I struggled to cut the toast into seven equal strips. The point is that it is entirely possible to introduce fractions in a natural and unthreatening way from a very early age and, provided you can have a bit of a sense of humour of cutting the piece of toast into 7ths or 10ths, it doesn’t have any downsides. Without a sense of size and an understanding of equivalency addition and subtraction is just an abstract process that will make little sense. As with just about every area of mathematics, understanding makes methods natural rather than abstract.

Who knew that it was possible to consider equivalent fractions, and addition and subtraction of fractions before 8am – I hope that fractions become the toast in your household!